I guess the first time I saw the word Kongsi was when I was taking the bus home from the army around 1987. I was based in a camp at Dempsey Road and I would take bus service 111 home. The bus would pass Takashimaya which was still under construction then and I noticed a huge sign, "Ngee Ann Kongsi" and was wondering if Kongsi was a Japanese name. So, I have to self-slap myself when I discover that it is the Teochew word for company.

Ngee Ann Kongsi used to be located in this magnificent building appropriately named the Teochew Building. 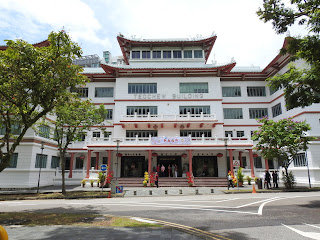 Ngee Ann Kongsi used to be located at Teochew Building, 75 Tank Road. The other organization located in this beautiful building includes Teochew Federation, Poit Ip Huay Kuan as well as Ngee Ann - Adelaide Education Centre (now Ngee Ann Academy). There is also a Ngee Ann Kongsi Heritage Hall at the ground level. Click on this link for some photos of the building before it shifted out. 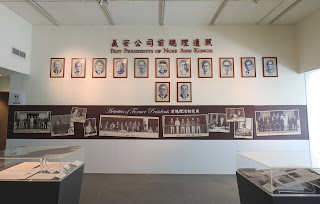 The origins of Ngee Ann Kongsi, a charitable foundation can be traced back to around the year 1845. The late Seah Eu Chin (佘有进) a Teochew Merchant along with 12 Toehcew merchants representing the surnames, Tan (陈), Lim (林), Chua (蔡), Ng (黄), Quek (郭), Teo (張), Goh (吴)  Sim (沈), Yeo( 杨), Chan (曾), Low (刘) and Heng (王) subscribed, collected and established funds to establish the Ngee Ann Kongsi. The original purpose was for the promotion, propagation and observance of the doctrines, ceremonies, rites and customs of the Teochew community as well as other charitable purposes for the benefit of Teochews in Singapore who originated from the 8 districts of Kwantung Province of China. These are the following 8 districts:

Overseas Teochew would typically form a clan association known as Poit Ip Huay Kuan for teochew in their locality.

Seah Eu Chin was a very successful merchant dealing with the gambier and pepper trade that he was crowned the "King of Gambier and Pepper" in Singapore during this time. Seah Eu Chin passed on in 1883 and was laid to rest over at Grave Hill along Thomas Road which was part of his plantation. Interesting enough, his resting was only discovered in Nov 2012. A portrait of him and his resting place can be found below: 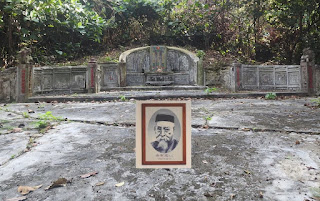 Shawn Seah, a descendant of Seah Eu Chin has written a book as well as creating a website about him. For readers who are interested in finding more about this great pioneer of Singapore, you should be able to find the book at our leading bookstores, titled "Seah Eu Chin – His Life & Times".

"The Ngee Ann Kongsi is a non-profit Teochew philanthropic organization focused on educational, cultural and charitable activities in Singapore while placing a deep emphasis on preserving the Teochew heritage."

If memory served me right from a presentation I attended years ago, 4 pillars supporting the mission of Ngee Ann Kongsi are Enterprise Development, Education, Culture & Heritage and Social Services. These 4 pillars are also found on display in the Heritage Hall. It is located on the right after entering the hall. 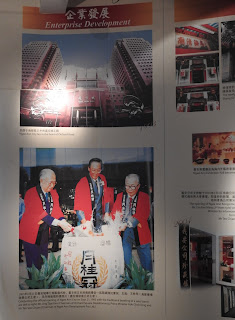 Enterprise Development is the revenue-generating arm of the Ngee Ann Kongsi that supports its philanthropic activities. The subsidiaries of Ngee Ann Development Pte Ltd and Ngee Ann property management manage the leasing of offices and retail space as well as functions and maintenance of properties under Ngee Ann Kongsi. 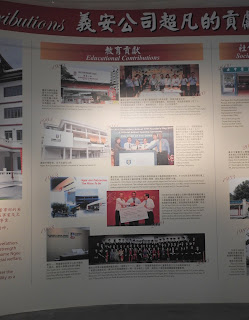 Typical of Chinese people who place very much emphasis on Education, Ngee Ann Kongsi contributions to the education of Singaporeans and not just Teochews are exemplary.

I believe most people would be quite familiar with the contributions by Ngee Ann Kongsi to education in Singapore from the press releases about its donation to NUS, NTU, SMU and many other educational institutions.  There are also the Tertiary and Bursaries (Study Awards) that it is given out every year to Teochews, Singaporeans and permanent residents. The Ngee Ann Kongsi Tertiary Awards are only for Teochew (Father must be Teochew), while the Ngee Ann Kongsi Post Graduate Scholarship in Social Sciences is for any Singapore citizen and permanent resident.

In terms of the development of Schools, Ngee Ann Kongsi truly leads by example in its belief in equal educational opportunities for all with the establishment of a girl school known as Ngee Ann Girls School in 1940. This is considered rare as, during this era, education was typically reserved for boys. The school has since been renamed Ngee Ann Primary School.

In the 1950s, Ngee Ann Kongsi under the visionary leadership of the late Dr Lien Ying Chow established a tertiary institution called Ngee Ann College. The purpose of this college was to fill the void where Chinese students in Singapore were unable to enrol on local tertiary institutions due to inadequate English proficiency and unable to further their studies in China because of political instability 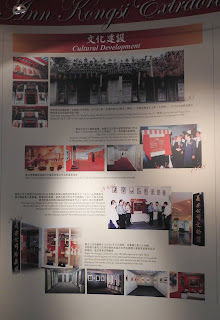 As the name suggests, the focus here is on Chinese culture and heritage, in particular, those of the Teochew values and arts. Ngee Ann Kongsi also seeks to improve public access to the arts through the art exhibitions and events that it organizes. One of the most recent events that they did was the Teochew cultural festival which is a Teochew Opera Extravaganza, held from 15 to 17 April 2022. Other events include the annual Ngee Ann Photographic Exhibition, National Day Calligraphy and Painting Exhibition cum student's calligraphy competition as well as Ngee Ann National Teochew Artist's Exhibition. These events used to be held at the Teochew Building. The Ngee Ann Kongsi Heritage Hall is a personal favourite as it showcased the history as well as the achievements of Ngee Ann Kongsi with a display of artefacts and archives collected over the years. 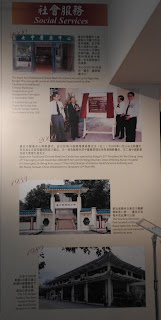 Wak Hai Cheng Bio, the oldest Teochew Temple in Singapore is what is called a Ma Zhou Keng similar to the Thian Hock Keng temple both dedicated to the deity Mazu or the Goddess of the Sea. These temples were set up by seafarers and merchants to express their gratitude for their safe voyage to Singapore.

Ngee Ann Kongsi has managed Wak Hai Cheng Bio since 1845 with the latest extension restoration work on the temple completed on 31 March 2014. The restored temple was conferred the "2014 Unesco Asia Pacific Awards for Cultural Heritage Conservation - Award of Merit" by UNESCO.

According to the Ngee Ann Kongsi's website, the objective of the Teochew Funeral Parlour is to continue its original objectives of preserving the funeral rites of the Teochew community. I am not familiar with these rites even as a Teochew. I guess it is something that I need to learn more about.

This parlour was constructed in 1989 to serve the needs of the Teochew after the Government acquired the Kongsi's cemetery on Upper Serangoon Road (Guan Yi Shan).  Although it is a Teochew funeral parlour, it is open to the general public as well. 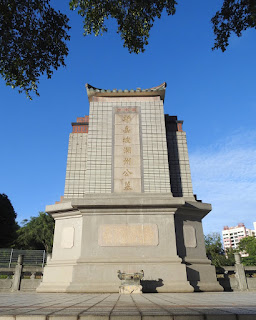 Besides taking care of the living Teochews in Singapore, Ngee Ann Kongsi also ensures that they have a final resting place when they passed on. Back in the olden days, Ngee Ann Kongsi used to have Teochew cemeteries around the island to serve this purpose. However, with the government acquiring land for development over the past decades, these Teochew cemeteries were not spared as well. Hence, the Teochew Memorial was set up to house those unclaimed remains when the Teochew Cemeteries were acquired.

Located at 569 Yishun Ring Rd, Singapore 768691, this 6-acre Memorial Park is quite a tranquil place to visit. Unfortunately, it is not open all the time except when Ngee Ann Kongsi and other Teochew organizations conduct prayers and ceremonies and rites at the park. More about the park can be found in this blog post.

3. An Introduction To The Culture And History of The Teochews in Singapore

5. The Story of Singapore Teochews